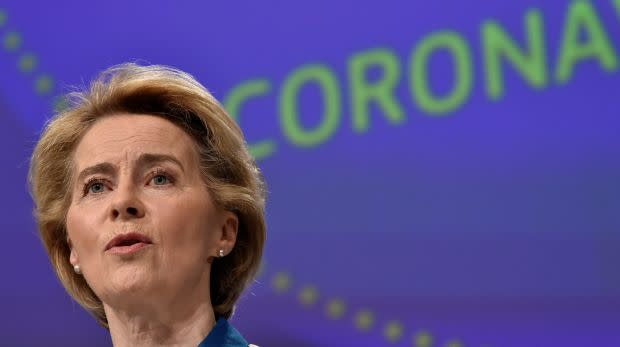 A fundraising event convened by the European Union and billed as a show of global solidarity in the fight against Covid-19 instead showed just how political this public health crisis has become.

The Coronavirus Global Response Pledging Conference—launched today and featuring representatives from 43 countries, as well as major nonprofit and scientific groups—collected pledges worth €7.4 billion ($8.2 billion) to “accelerate the development, production and equitable access to Covid-19 vaccines, diagnostics, and therapeutics.” The Commission says they will continue raising money in the near future.

“Today we can truly say the world is united against the coronavirus, and the world will win,” said Ursula Von Der Leyen, president of the European Commission.

Even before it launched, however, the fundraising drive was controversial. First, EU officials allowed countries to pledge money that they had already spent on Covid-19 relief since Jan. 30, as opposed to counting only new funds as part of the recorded pledges. The Commission also hasn’t clarified on its website how much of the countries’ pledges are made up of new funds versus old ones.

Then, some civil society groups questioned how the EU would distribute the money raised. While $8 billion is a lot of money to pour into research, the EU has so far refused to impose price caps on pharmaceutical manufacturers, or force companies that receive public funds to give up their intellectual property—through mandatory licensing, for example, or less drastically, patent pools or cross-licensing—so that drugs and vaccines can be mass-produced cheaply.

And, while the guest list for this event was a who’s-who of global health governance, the US was noticeably absent, even though it is home to the largest pharmaceutical companies in the world, many of which are now leading the race to develop a vaccine for Covid-19. The world’s biggest superpower, in essence, contributed less to this effort than Madonna.

The fact that the US didn’t participate in the fundraising effort will likely fuel world leaders’ concerns that, if the US develops a vaccine first, it will give it out only to its own people, and even if it doesn’t develop one first, it will attempt to buy up the global supply and leave poorer countries in the lurch. There’s justification for that fear: According to the German government, the US approached a German drug company with an offer to buy exclusive rights to the coronavirus vaccine they are developing. And the US recently suspended funding to the World Health Organization (WHO), the public health body that is the primary vehicle of global support for poorer countries.

That’s why WHO director general Tedros Adhanom Ghebreyesus said during the conference that “the ultimate measure of success will not be how fast we can develop tools,” but rather “how equally we can distribute them.”

Sign up for the Quartz Daily Brief, our free daily newsletter with the world’s most important and interesting news.