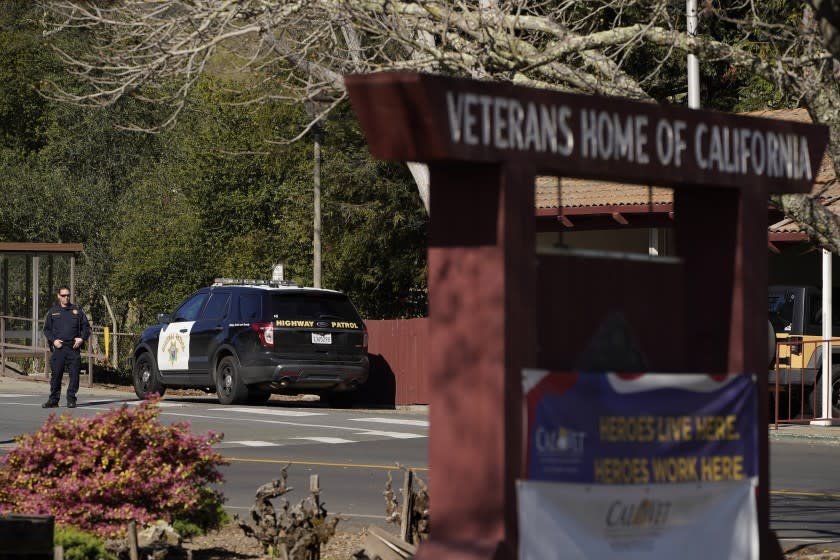 Yountville Veterans Home cleared after reports of woman with shotgun

Several law enforcement agencies responded Tuesday morning to a report of a woman with a shotgun at a veterans facility in Napa County, but no suspect was found, and authorities called off the search after several hours.

The Napa County Sheriff’s Office sent out an alert at 8:20 a.m. asking people to avoid the Veterans Home of California in Yountville.

By 12:30 p.m., the property had been cleared, and there was no evidence of a shooter, California Highway Patrol Sgt. Raul Gonzalez said. There were no indications that any shots had been fired.

A report of a woman with a shotgun near the Holderman hospital building, which is near the Veterans Home, prompted a response from the CHP, the Napa County Sheriff’s Office and SWAT units, the Napa Valley Register reported.

“CHP and multiple allied agencies immediately responded” and conducted “an extensive search via ground and air in an attempt to locate the possible subject,” CHP spokeswoman Fran Clader said in a statement.

But, Gonzalez said, “there was no confirmation that a person with a gun was walking.”

No witnesses have come forward, and a weapon was not located during the search, CHP said in an update that went out just after 1:30 p.m.

Several CHP units will remain on scene out of an abundance of caution, but the veterans facility will resume normal operations, officials said.

The Yountville facility is the largest veterans home in the U.S., housing some 1,000 veterans from World War II, the Korean War, the Vietnam War, Desert Storm and Operation Enduring Freedom/Operation Iraqi Freedom, according to the California Department of Veterans Affairs.

Three years ago, a veteran shot and killed three employees at a residential unit in the Yountville Veterans Home.

The shooter, identified by authorities as 36-year-old Albert Wong of Sacramento, was found dead along with three female victims at the facility where he had once lived.

The Associated Press contributed to this report.