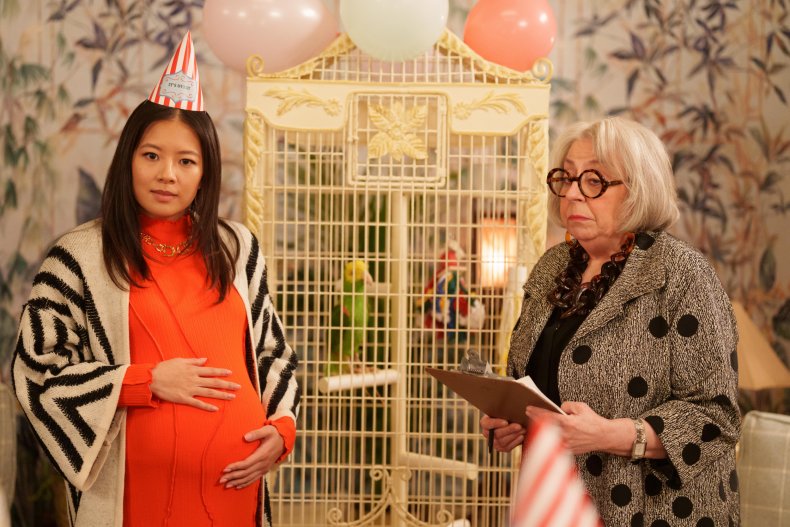 Who Killed Bunny in ‘Only Murders in the Building’ Season 2? 5 Key Suspects

If you wanted to know more about the final days of Arconia’s latest murder victim Bunny Folger (played by Jayne Houdyshell), Episode 3 of Only Murders in the Building gave you everything you need to know.

After 29 years of serving as the Board Manager of the Arconia (a position she had inherited from her mother) Bunny was stepping down and passing on the baton to her powerful and pregnant protégé, Nina Lin (Christine Ko).

Ever since Season 1, audiences had been under the impression Bunny was a “grumpy old b****”, a picture painted by angsty 20-something Mabel (Selena Gomez), and her annoying neighbors, Oliver (Martin Short) and Charles (Steve Martin). However, in Episode 3, audiences learned that deep down, Bunny had a heart of gold – tipping her favorite waiter a huge amount of money so he could pursue his DJ dream and even trying to make amends with Mabel, Oliver, and Charles.

Before Mabel, Oliver and Charles were able to embrace Bunny’s kinder side, she was found dead in Mabel’s apartment, with Mabel’s knitting needle plunged into her chest. Mabel, Charles, and Oliver did not kill Bunny, so who did?

Newsweek has a recap of the top five suspects from Episode 3 below.

Who Killed Bunny in Only Murders in the Building?

Nina is the lucky woman taking over from Bunny as the Arconia Board Manager when she officially retires.

In Episode 2 of Only Murders in the Building, cat-loving Arconia resident Howard let it slip to Howard, Mabel, and Oliver that Nina and Bunny did not always see eye to eye. It seemed like a flippant comment at first but it may have actually held some truth.

On the surface, Nina seemed lovely, dedicated to taking over from Bunny as board manager and preserving her legacy, but in Episode 3 the facade began to crack and Nina’s true colors began to show.

Sure, Nina is really set on taking over as board manager, but it soon transpired that taking on the job was not a reflection of her love for the building, but due to the huge profit she plans to make from it.

When Bunny learns of Nina’s plans to modernize and monetize the Arconia during a heated argument at her own retirement party, Bunny vows to retract her resignation and remain in control of the Arconia, visibly enraging Nina.

Nina certainly has the biggest motive to kill Bunny, or at least get somebody to do it on her behalf.

Knowing how Only Murders in the Building goes, it is very unlikely Nina is Bunny’s killer and is simply a red herring – but for now, she is the biggest, unofficial suspect, with a pretty solid reason to wish Bunny dead.

2 . A Murderer in the Building

If it wasn’t Nina who killed Bunny, it certainly had to be somebody with access to the Arconia building.

What if the murderer is a stranger we have not yet met and has been hiding in the Arconia shadows all along?

In Episode 3, we learn Bunny was visited by someone dressed entirely in black on the night she died. They did not utter a word but banged her apartment door until she answered. They then engaged in a struggle and while we did not exactly see the mysterious figure kill Bunny, it is fair to believe her life ended there and then.

However, Bunny was actually found somehow in Mabel’s apartment, suggesting her killer may have deliberately placed her in there. But to get in, they surely must have had access to a key.

Bunny’s mother Leonore (Shirley Maclaine) popped up in Episode 2 of Only Murders in the Building, searching for one thing and one thing only – Bunny’s “porny” art collection. In particular, she was after the painting by Rose Cooper, signed “Savage, 56.”

When Bunny was dying, her last words to Mabel were “Savage” and “14” with the former potentially referring to the painting.

In the end, it turned out the painting had been swapped for a fake leaving a big question -was the real painting stolen and replaced by a fake, or was the painting genuinely fake?

One thing is for sure, Bunny’s mother was desperate to get her hands on it.

It might be a long stretch but could it be possible that rival podcast host Cinda Canning orchestrated Bunny’s death to provide greater episode content for herself? Let that thought linger.

We haven’t been reunited with Jan (Amy Ryan), Tim Kono’s killer from Season 1 yet, but how do we know Tim was her only victim? After all, she did try and kill Charles by poisoning him in the series finale.

Jan may be in prison but she may have contacts on the outside who could be carrying out her dirty work.

Hopefully, Mabel, Oliver and Charles will be one step closer to the truth in Episode 4 next week.

Only Murders in the Building airs Tuesdays on Hulu and Disney+.