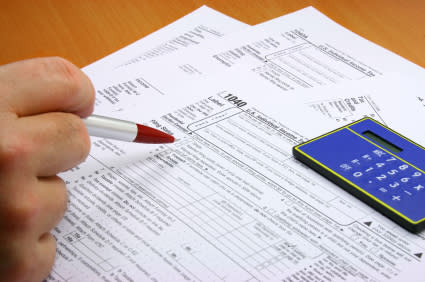 Filing your taxes can be an annoyance, but it can become even more of a nuisance if you get audited by the IRS.

Find Out: This Is Where Your Tax Dollars Actually Go

Fortunately, your chances of being audited are small — only 0.6% of the individual tax returns filed for tax years 2010 through 2018 were audited, according to the latest IRS data. However, that small fraction still amounts to over a quarter million tax filers getting audited, so it can happen if you’re not careful.

So that you’re prepared, these are the red flags the IRS looks out for when reviewing your tax returns.

“The IRS often identifies red flags through automated computer programs,” said Nate Smith, director in the CBIZ MHM National Tax Office. “Almost all returns submitted to the IRS are analyzed by a computer program to search for an anomaly or a result that deviates from norms. Under this program, each return is assigned a score, which the IRS calls a ‘DIF’ (Discriminate Function) score. The DIF score is used by the IRS to identify returns for examination.”

One factor that would negatively impact a DIF score is a charitable contribution deduction that is disproportionate with your overall amount of income, Smith said.

Read: The Major Tax Changes for 2021 You Need To Know About

Mismatches Between Reported Income and Data on Your Tax Forms

Make sure the income you report matches exactly what it states on your Forms W-2 and 1099. Any mismatches are considered a red flag, Smith said.

Take a Look: How To Avoid Paying Taxes Legally — and the 11 Craziest Ways People Have Done It

Sales Tax by State: Here’s How Much You’re Really Paying

Business Income and Expenses That Are Out of Whack

“The IRS is always on the lookout for both unreported income and high expenses,” said Dave Du Val, chief customer advocacy officer at TaxAudit. “Self-preparers should be cautious of accidental duplication of employee and business expenses, and of taking losses on activities that might be a hobby rather than a business activity.”

Make the Right Moves: What Can I Write Off on My Taxes?

“The IRS loves to pounce on people who report high itemized deductions,” Du Val said. “It’s fine to claim these legally allowable deductions for your actual qualifying expenses, but make sure you have your documentation on-hand to support your position before you file your tax return.”

Du Val notes that 2017 was the last year that unreimbursed employee business expenses were allowed to be deducted on federal returns.

“(However), many states — such as California — will still allow the deduction, so it’s still important to hold onto receipts,” he said.

“Tax returns with what appears to be inflated rental expenses are frequently caught in the IRS net,” Du Val said. “Some of the deductions on the Schedule E for rental income, where the income and expenses for rentals are reported, can be easily misinterpreted. Those who prepare their own tax returns should take the time to understand the deductions they are claiming. Not knowing the difference between a deductible expense and one that must be capitalized over a number of years could result in a disaster in an audit. This is especially true if you rent a room(s) to a roommate, as ‘common-use’ areas are not allowed as rental areas.”

When two people claim the same dependent, the IRS gets involved.

“Although separated and divorced parents who have custody have the clear advantage, they still have to prove everything by providing birth certificates, school records and more,” Du Val said.

Du Val said that those who file using the head of household filing status are often questioned because the way you categorize dependents with this status can be confusing.

“The (most recent) tax reform bill has not made the rules any easier to understand; in fact, under the Tax Cuts and Jobs Act of 2017, there is a new $500 credit for what the IRS calls ‘qualifying relatives’ who are not necessarily people who are even related to you, but who meet certain tests and are not eligible for the child tax credit,” he said.

If your expenses are high but the income you are reporting is not, this could be a red flag for the IRS.

“For example, a taxpayer who claims a deduction for mortgage interest on a million-dollar mortgage (or the new $750,000 mortgage limit) and personal property taxes on expensive vehicles has a good chance of showing up on the IRS’s radar if their taxable income is not enough to pay these expenses,” Du Val said.

A Schedule C for self-employment that reports just the “right ratio” of income and expenses to qualify the taxpayer for a large earned income credit is a red flag, Du Val said.

“The available credit is as high as ($6,660 for 2020) for a taxpayer whose income is below a certain threshold,” he said. “Taxpayers who claim EIC and whose returns include a Schedule C business form should be prepared to show proof of all expenses, and even income listed on the return.”

Be Prepared: These Are the Receipts To Keep for Doing Your Taxes

199A Deduction for Real Estate Rentals

Some people who claim this deduction don’t actually qualify for it.

“To be eligible the owner needs to have a contemporaneously written log showing that they have put in a minimum of 250 hours of non-investor type activity hours into the rentals,” Du Val said. “Examples do not include such activities as commuting to the rental, reviewing the records or preparing a tax return. Meeting this requirement does not automatically qualify a taxpayer to be considered a ‘real estate professional’ for tax purposes, or to exclude this income from the Net Investment Income Tax (NIIT) calculation.”

The law requires Americans with foreign financial accounts to report accounts to the U.S. Treasury Department, even if they don’t generate any taxable income. The Bank Secrecy Act requires you to file a Report of Foreign Bank and Financial Accounts (FBAR) if you have financial interest in, signature authority or other authority over one or more accounts in a foreign country and the aggregate value of all foreign financial accounts exceeds $10,000 at any time during the calendar year, according to the IRS.

Failure to report these accounts could land you in hot water with the IRS. If you don’t disclose overseas accounts, the IRS might find out about them anyway because foreign institutions are required to disclose account holdings by U.S. citizens, CNBC reported.

What To Do If You Get Audited

Hopefully being aware of these red flags will prevent you from being audited — but if you do end up hearing from the IRS, here’s what to do to be prepared.

To defend yourself during a tax audit, you’ll need documentation to back up what you claimed on your return. The documentation you will need will depend on what it is you’re being audited for but can include receipts, bills, canceled checks, employee documents, legal papers, loan agreements, trip logs, medical or dental records, theft or loss documents, business trip tickets or a Schedule K-1.

The Taxpayer Advocate Service is an independent organization within the IRS that protects taxpayer rights and assists with tax-related problems. If you’re audited, you can contact the service for help.

Most audits are conducted via correspondence, but if you do need to meet with an auditor in-person, consider hiring an attorney or another advocate to represent you.

“The best thing to do if you’re subject to an IRS audit is to hire someone and authorize them to go to the audit,” said Paul Joseph, an attorney, CPA and president of Joseph & Joseph, LLC. “Never go yourself. In fact, my clients don’t go at all. It is my position that I never let my clients come to an audit because they are expected to know all of the answers immediately. By not having the client attend the audit, they’ll have an opportunity to discuss and fully explain the return with the hired professional prior to giving a response to the IRS.”

This article originally appeared on GOBankingRates.com: These Red Flags on Your 2020 Tax Return Could Spark Interest From the IRS