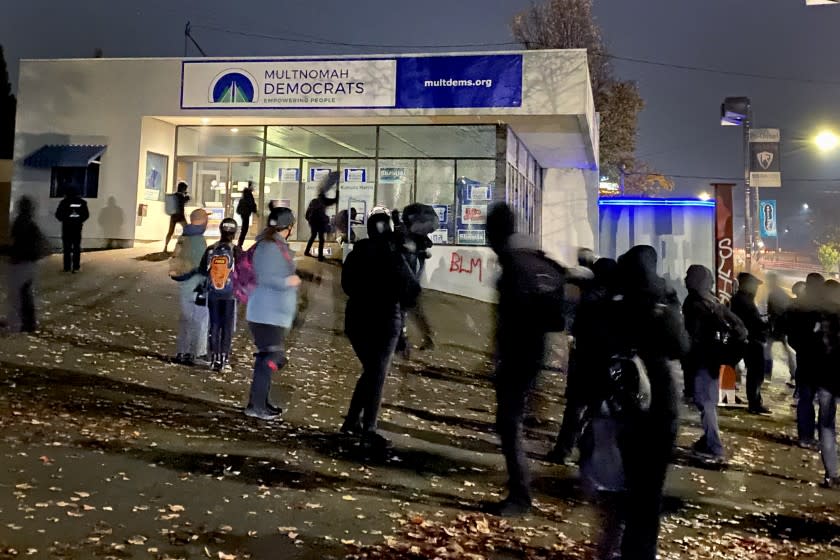 Portland’s anarchists say they support racial justice. Black activists want nothing to do with them

The day after President-elect Joe Biden delivered his victory speech, telling the nation it was time to heal and unite, a clandestine Twitter account — @safePDXprotest — summoned Portland anarchists.

Meet at Laurelhurst Park at 8 p.m. and “Wear Bloc & Be Water,” the message said, calling for black garb and vigilance to evade police for a protest “in solidarity with BLM” — Black Lives Matter.

The 50 or so people who showed up — nearly all of them white — looked like ninjas as they put on balaclavas, hoods and scarves. Some carried gas masks.

The call to action had declared “No Masters” — leaders, in the parlance of 19th century European anarchists — but the crowd huddled around one young man as he lambasted liberals for celebrating the defeat of President Trump while capitalism and the political system remained entrenched.

“They can show up to dance ’cause of Orange Man bad, but they can’t be out here fighting with us,” he said. “So that’s why we’re going. … I’m tired of liberal complacency.”

Word spread through the group that the target tonight would be the local headquarters of the Democratic Party.

Somebody started beating a drum as a chant broke out: “F— Joe Biden!”

Then the anarchists marched into the upscale neighborhood, intent on destruction.

For months, Portland has been a significant face of the Black Lives Matter movement, in part because of the national attention that self-described anarchists brought to nightly protests throughout the summer.

They set fires, launched fireworks at authorities and spat in their faces to draw them into violent confrontations that made headlines around the world.

The election of Biden has only antagonized the anarchists — and exposed their differences with the Black activists they claim to support.

Black activists and community leaders, who generally view the defeat of Trump as an opportunity for change within the system, said the anarchists are hijacking the movement and undermining the push for racial justice by continuing to commit violence.

“When people set fire to a building, it really does not liberate me one bit,” said Mingus Mapps, a Black resident who won a seat on the Portland City Council this month. “It does the opposite. It fuels the political culture that makes racism possible.”

The former political science professor, who peacefully participated in several demonstrations, plans to advocate for police reform beyond budget cuts passed by the council and a measure approved by voters to create a police oversight board.

“We’re going to get out of the game of smoke bombs and rubber bullets and dressing cops up like they’re Marines as we stand outside public buildings and yell at each other,” he said.

The anarchists believe working within the system is futile and say the political order and capitalist economy must be torn down.

Biden, as head of a party supporting the free-market system and private property rights, is no better than Trump, more than a dozen said in interviews.

Distrusting the media, all refused to give their names. But pamphlets distributed at a recent rally outline their far-left philosophies.

“Abolish All Mayors” — the title of one booklet — advocates “the complete democratization and community control of all city bureaus and the abolition of the police.”

“Why We Break Windows” advocates an end to private property and invokes the Boston Tea Party to explain the point of “political vandalism” during revolts.

“Shop windows represent segregation,” it says. “To smash a shop window is to contest all the boundaries that cut through this society: black and white, rich and poor, included and excluded.”

In some ways, the anarchists have served the Black Lives Matter movement in Portland, creating a spectacle that drew attention to the cause of racial justice after the death of George Floyd in Minneapolis police custody.

Some of the anarchists have also been involved in antifa, the movement that clashes with far-right groups.

But the violence has also caused problems for Black Lives Matter.

In June, Black community leaders denounced an arson attack by protesters on a building that houses a police station and Black-owned businesses on Northeast Martin Luther King Jr. Boulevard.

“When I hear about somebody burning something down, I think about that as an act that’s always been used against Black people,” Ron Herndon, a longtime Black activist, said at a news conference the morning after police used tear gas to disperse protesters firing paintballs. “You are not helping us.”

The Trump administration soon deployed federal agents to the city. Their tactics — which included secret detentions of activists and the wholesale use of tear gas and flash-bang grenades against growing crowds — were widely seen as excessive and drew more protesters into the streets.

Video of street battles became fodder for Trump, who chastised city and state politicians as part of his campaign theme calling for law and order.

The anarchists reveled in the limelight. Each night they would provoke authorities, who would eventually declare a riot or illegal assembly and start making arrests as protesters fled.

The protests grew less frequent by the fall as demonstrators tired, nearby wildfires shrouded the city with smoke and the presidential election — with its possibility of ousting Trump — drew nearer.

For the anarchists, the election was no time to let up as they sought to make their point that a change of power was meaningless. The night of Nov. 4 — the day after voters went to the polls — anarchists rallied in a park, then marched into downtown.

They briefly intersected with a peaceful demonstration calling for all votes to be counted — a cause that meant nothing to them. Proceeding with their march, some smashed windows at downtown businesses and a church that provides food and services to homeless people.

Kristin Van Buskirk, whose gift shop window was shattered, said the incident did not diminish her support for the Black Lives Matter movement and did not blame it for the damage she suffered.

“Black lives matter more than my business,” she said.

The next day, about 60 people marched to the home of Dan Ryan, a City Council member who had voted that day against police budget cuts.

They chanted “Black lives matter,” shattered a window and chucked eggs and a paint-filled balloon at the house.

“I don’t know what their goal is other than just destruction,” said Officer Derek Carmon, a Portland Police Bureau spokesman. “My hope is that we’ll see less of this, but it’s difficult when you’re dealing with a group of people who don’t want to engage the police in a conversation about change.”

“With the BLM protests there were clear demands, but it’s very difficult to see an end to something when it’s not clear what the demands are,” she said.

In interviews, several Black community leaders who had marched in protests over the summer said that it was crucial to condemn the violence and dissociate Black Lives Matter from the anarchists.

“I don’t think those windows were smashed because they were thinking about my life and the lives of my children,” said Toya Fick, Oregon executive director of Stand for Children, a nonprofit that advocates for equal opportunity in education.

It took the anarchists 20 minutes to make their way through the Laurelhurst neighborhood Nov. 8 and arrive at the county Democratic Party headquarters.

Tall plate-glass windows lined the former car dealership on two sides, festooned with campaign posters for Biden and other candidates.

Two activists approached the building, one holding an umbrella to conceal the other, who spray-painted an anti-Biden epithet on a wall, adding an anarchist symbol. In red, he wrote “ACAB” — short for “all cops are bastards.”

Six more protesters pounded on the windows, shattering 13 of them before rejoining the group keeping watch in the parking lot.

“Stay together, stay tight, we do this every night,” the group chanted before marching back across the avenue and dispersing into the neighborhood.

Police in riot gear arrived, riding troop trucks and bicycles to search for suspects. Scouring the neighborhood, they arrested three white men in their early 20s and 30s on accusations of criminal mischief.

The next day, Rachelle Dixon, who heads Portland’s Black Lives Matter chapter, called a reporter to say that the activists had nothing to do with the social justice movement.

She said that in the minds of the public, anarchists have “melded with Black Lives Matter, but they’re 90% white and they don’t reach out to Black organizations.”

Dixon also serves as a vice chair of the Multnomah County Democrats.

“I didn’t destroy my own building,” she said.