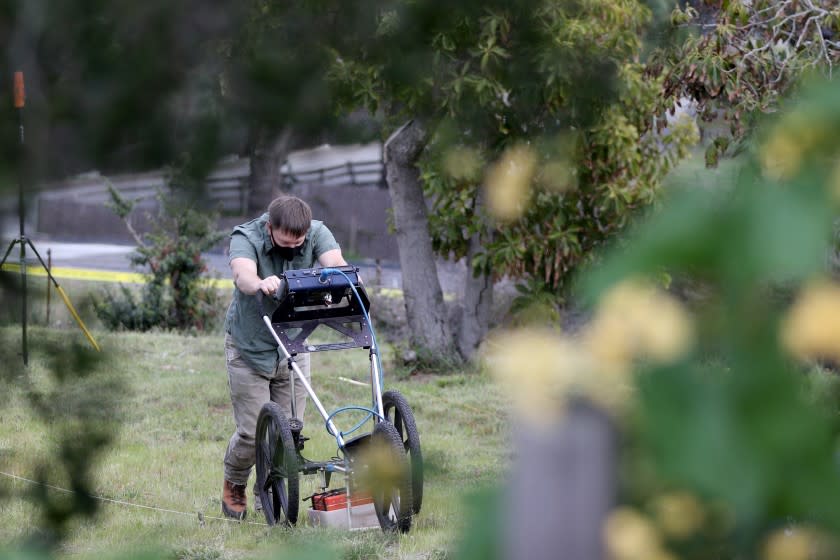 Nearly 25 years after Kristin Smart vanished while walking back to her dorm at Cal Poly San Luis Obispo, investigators were searching a nearby property Monday using cadaver dogs and ground-penetrating radar.

Detectives with the San Luis Obispo County Sheriff’s Office served a search warrant at the Arroyo Grande home of Ruben Flores, the father of Paul Flores, who has long been considered a person of interest in Smart’s disappearance and is now considered the “prime suspect,” authorities said. In the past, he has denied any wrongdoing.

Paul Flores, who lives in San Pedro, was the last person seen with Smart before she disappeared in 1996. They were both students at the time.

A San Luis Obispo County judge authorized the Sheriff’s Office to use the dogs and radar in conducting the search. The property was first searched in the 1990s.

“This process could potentially take one to two days to complete,” department spokesman Tony Cipolla said. “The search warrant has been sealed. As a result, we are precluded by law from disclosing any further details regarding it. This is an active and ongoing investigation. The Sheriff’s Office will not be commenting any further, and no additional information will be released at this time.”

The statement identifying Paul Flores a prime suspect rather than a person of interest reflects the growing intensity in the investigation over the last year.

In February, Flores was arrested by Los Angeles police on suspicion of being a felon in possession of a firearm. The arrest stemmed from information from the San Luis Obispo County Sheriff’s Office, which searched Flores’ home in April accompanied by Los Angeles County sheriff’s deputies. Flores has a previous felony conviction for driving under the influence.

That search followed another in February at a home in the 900 block of West Upland Avenue and three other locations in California and Washington state. All the search warrants have remained sealed.

Multiple sources have told The Times the searches are part of an ongoing effort to gather physical evidence, including DNA, that may reveal what happened to Smart, who disappeared May 25, 1996, as the 19-year-old was on her way home from an off-campus party. Flores was seen walking on a path to the college dormitories with her the night she went missing.

Flores was questioned in Smart’s disappearance at the time. He has lived in San Pedro for more than a decade while working in Orange County, according to sources.

Smart’s family has sued Flores in civil court, but he has not been criminally charged. In response to the lawsuit, Flores has denied the allegation. He invoked his 5th Amendment right against self-incrimination before a grand jury and in a civil deposition.

Members of Smart’s family said they were “encouraged” by news of the search. “We appreciate the vigilance and professionalism of Sheriff Ian Parkinson and his department, and our family looks forward to learning more in the hours and days ahead,” the family said in a statement.

The search of the Flores property marks the latest turn of events in one of California’s most enduring cold case mysteries.

After Smart disappeared, law enforcement used helicopters, horses and ground-penetrating radar in the hunt for the missing student. She was officially declared dead in 2002, although her body was never found.

In 2016, federal investigators dug up a hillside near the Cal Poly San Luis Obispo campus, looking for remains. They also searched the yard of a home.