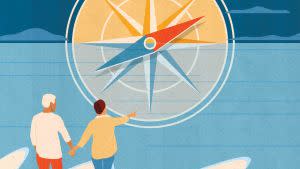 My Search for the Perfect Place to Retire

This isn’t about you, Northern Virginia. On second thought, maybe it is. We must be going. Not right now, but when we retire.

My wife and I have found a lot to like about our bedroom community near Washington, D.C. Access to the best of the arts, the soulful vibe of the city, professional sports and the historical sites make my heart sing. Point the car west and we can be in the foothills of the Blue Ridge mountains in 45 minutes, or on Skyline Drive in Shenandoah National Park in not much longer.

But as we approach retirement, we have to look at whether it makes financial or lifestyle sense to continue living in busy Northern Virginia after we retire. For us, it just doesn’t. In pre-pandemic times, traffic was always nightmarish—and, due to construction of even more federal government buildings a mile from our house, it was getting worse. Plus, the cost of living here is high.

After I mentioned in an earlier column about our plans to leave this area in retirement, reader Denis Symes of Fort Collins, Colo., warned me that I might regret it. He and his wife retired and moved from Northern Virginia to Fort Collins to be close to grandchildren. “We’ve never lived in a small rural town before and deeply miss Virginia and the cultural attractions in the D.C. area,” Symes wrote. “Yes, the cost of living and housing are much less, but the absence of a metropolitan area is deeply missed; lower costs don’t make up for this. I’ve met other retirees here who feel the same way.”

We’ve been scouting potential retirement regions for a few years, and we’re keeping metro access top of mind. Two areas are making the cut: the Shenandoah Valley of Virginia (close to D.C. but worlds away) and the Lowcountry region of South Carolina, close to Myrtle Beach. In both cases—and to a greater extent in South Carolina—housing and taxes, among other things, are less expensive than in Northern Virginia.

According to the Kiplinger State-by-State Guide to Taxes on Retirees, Virginia ranks as a tax-friendly state for retirees. Residents 65 and older can deduct up to $12,000 per person of retirement income, subject to income-eligibility limits. Property taxes in Virginia are modest, and sales taxes are low. And there are no inheritance or estate taxes. And yes, we’re already living in Virginia, but other parts of the state have a lower cost of living.

South Carolina is ranked as one of the most tax-friendly states for retirees. Taxpayers age 65 and older can exclude up to $10,000 of retirement income (up to $3,000 for taxpayers younger than 65). Seniors can also deduct $15,000 from other taxable income ($30,000 for joint filers). The first $50,000 in value of a senior’s home is exempt from local property taxes. And property taxes overall are the fourth-lowest in the nation. (You can see how each state taxes retirees and compare up to five states.)

Historic Staunton. The reason for our first visit to Staunton, Va., in the Shenandoah Valley, was a weekend outdoor art festival in a downtown park, where we were quickly corrected on the pronunciation of the town’s name. The city’s name is pronounced Stanton and always has been, even back in its 19th-century heyday as a busy railroad hub (the pre–Civil War buildings are testimony to the fact that Staunton was spared from severe damage during the conflict). Staunton has six connected historic districts, all listed on the National Register of Historic Places.

The historic Main Street and its downtown arteries are chock-full of independent gift shops, bookstores, art studios and galleries, and artisans. Restaurants and breweries, along with the retail and art studios, are housed in one historic building after another.

Woodrow Wilson grew up here, and Wilson’s Presidential Museum and Library is one of the attractions. Fan out further into the Shenandoah Valley and you’ll find plenty of other historical sites and towns, including another of our favorites, Lexington. Charlottesville and Thomas Jefferson’s Monticello are about an hour away back across the mountains, too.

The American Shakespeare Center offers productions year-round. Should we land in Staunton, I fully intend to volunteer or somehow be a part of it and finally put my college theater degree to work after all these years. There’s also the Heifetz International Music Institute summer festival, events at the city’s Mary Baldwin College, the Staunton Music Festival and the Virginia Hot Glass Festival. Nearby, events abound at the Frontier Culture Museum.

Staunton’s hub location also makes it a launching pad for outdoor adventures on the Shenandoah River and in the Blue Ridge and Appalachian mountains.

Lowcountry charm. Pulling up roots from your longtime home may mean leaving behind your grown children, grandchildren and friends. It’s why many retirees—particularly northerners escaping the harsher weather—become “halfbacks.” They move to the Deep South, tire of the missed connections, and end up moving halfway back north toward their former home, family and friends.

The Carolinas are popular halfback states. And for us, one of the appeals of South Carolina is the climate: It’s not as hot in the summer as Florida and Georgia, two popular states for retirees.

Should we decide to make South Carolina our retirement destination, we won’t be alone in our journey, because we’ve had several friends move there recently. And according to the U.S. Census Bureau, about 17% of the state’s population of 5.1 million are age 65 or older. For the past several years, South Carolina has seen about 63,000 people move there annually.

Our South Carolina desti­nation of choice right now is Myrtle Beach, but anywhere in the Lowcountry is game. We like the proximity to the beaches, as well as to friends who live in the area. Myrtle Beach is a big enough city that we would have access to excellent health services, multiple entertainment options, several supermarket chains offering good options and, high on the list, Costco. Make that Costcos—with attached liquor stores, because that’s how South Carolina rolls.

Another plus for that region is its proximity to even bigger cities and resort destinations. One of my favorites, Charleston, is a couple of hours away from the Myrtle Beach area. Savannah, Ga., another city I like a lot, is just about four hours away.

For many retirees, the lure of the Myrtle Beach area is its reputation as a top golf destination, with about 80 private, semiprivate and public golf courses. It’s not my game at this point (perhaps someone can teach this lefty), but another type of golf is: Miniature golf, which is also a very big deal in Myrtle Beach, is my jam. Perhaps I should pack clubs. (They do sell miniature-golf club sets, don’t they?)

In making frequent week- and weekend-long ventures to Staunton as well as Myrtle Beach, we’re following Kiplinger’s advice. Our list of 16 Retirement Mistakes You Will Regret Forever includes “relocating on a whim.” You can get a taste for a place in a one-week visit, but ideally, if you can swing a month (and go at different times of the year), that’s even better. Airbnb and Vrbo offer less-expensive options than a month at a hotel.