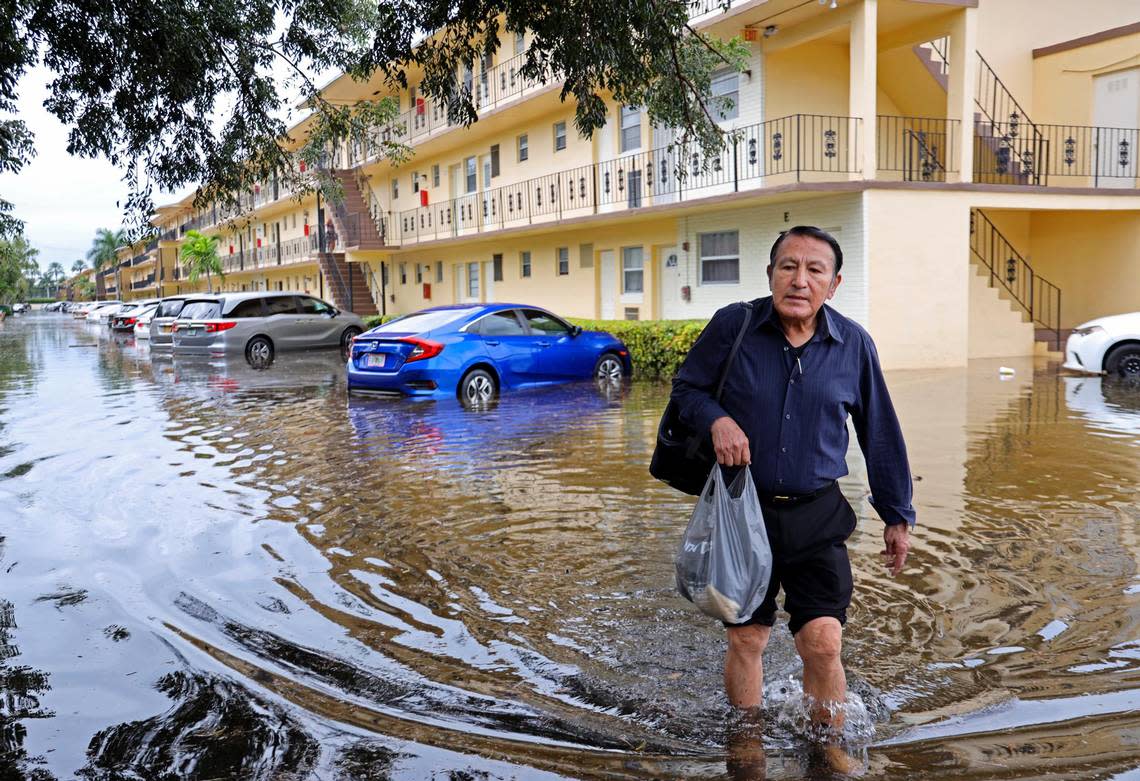 Is your property a flood risk? New tool shows millions are, including entire Florida towns

A new app designed to rank the flood risk for every property in the U.S. has some distressing findings for Florida.

The cities with the most properties at risk are all over the state — from Tampa, the city most at risk to storm surge, to Cape Coral, which Politico memorably dubbed “the boomtown that shouldn’t exist,” to sunny-day flooded Miami and Fort Lauderdale.

But the data reveal rarely mentioned cities where virtually every home is at risk of flooding today. They include the 5,000 homes in Sarasota County’s Warm Mineral Springs, the 4,000 homes in the upscale Broward County boaters’ haven of Lighthouse Point and the 2,000 Caloosahatchee River-front homes of Whiskey Creek.

Similar efforts to gauge a property’s risk — for profit or for free — have been done in the past, but Flood Factor is the first such effort to include the combined flood risk from rain, storms, rivers and rising seas. Experts say access to information like this could shift the real estate market and discourage buyers from the riskiest properties.

Flood Factor, which launched Monday, offers detailed information on current and future flood risk on a 1 to 10 scale, with 10 denoting “extreme” risk. And Miami-Dade County has a lot of risk.

A map of the county using this data shows the barrier islands, as well as much of the coast, as a deep red highest danger zone. The light orange representing moderate flooding doesn’t appear until well past the coastal ridge, the ancient coral reefs that form the spine of rare high ground spine in the region.

But that’s not exactly news for South Florida, a hot spot for hurricanes rendered increasingly more destructive by climate change and no stranger to rising tides brought by the unchecked pollution of the atmosphere by burning fossil fuels. For decades, studies have shown Miami-Dade in particular is one of the most vulnerable places on Earth to climate change thanks to its low-lying geography.

A future of more flooding and storms is already driving up insurance rates and driving down home prices. The cost to hold the sea at bay is in the billions already, and preparation for the two feet of sea rise expected by 2060 has barely begun.

According to this new tool, 35 percent of Florida’s 8.9 million homes are at risk of at least minor flooding right now and 10 percent of those, or 900,000 homes, are currently at risk of severe or extreme flooding.

Flood Factor is the creation of First Street Foundation, a nonprofit research group focused on the relationship between property value and climate change. Previous work includes FloodiQ, a tool that estimates how much value a property has lost due to sea level rise. McKinsey, the global consulting firm, used First Street data in its report that shows Florida real estate at risk of flooding could lose 5 to 15 percent of its value by 2030 and 15 to 35 percent by 2050.

More than 40 researchers worked on First Street’s new tool for over a year, but the methodology is still in peer review.

Searching a property on the site shows the flood risk from 1 to 10 but also shows the increasing likelihood of flooding over 30 years, the timeline for a typical mortgage. Users have a range of tools that show what future flooding might look like on the property and how this specific parcel compares in the neighborhood, city, county and state.

What this new tool offers is the information that big companies — like hedge funds and major developers — have already had access to, but for everyone else. Previously, consumers hoping to figure out their flood risk have had to turn to notoriously unreliable FEMA flood maps or paid services, like the pioneering South Florida flood risk company Coastal Risk Consulting.

It’s the kind of information that can make a difference in whether someone buys a home or how much they’re willing to pay for it.

Putting this kind of information in the hands of home buyers is a “lightning bolt,” said Peter Zalewski, a Miami condo market consultant and investor. “It’s going to create a wedge between buyers and sellers.”

The risk of sea level rise is chipping away at Miami home values, new research shows

“We’re correcting for the asymmetry of that knowledge right now,” he said. “We’re trying to provide people the data they need to make the right decisions.”

For experts on climate change, the “right decision” means moving people away from the coasts, a process known as retreat. The idea is to get people out of harm’s way, where they’re less likely to get struck by a powerful hurricane or face the economic crunch of soaring wind and flood insurance paired with dropping home values in the future.

Florida has been doing the opposite for decades, concentrating new development and more people along the coasts.

Real estate industry folks argue there’s no incentive to move inland — yet. Property values are still high and rising every year as buyers clamor for waterfront property, despite the growing body of evidence that shows climate change could spoil their investment.

Experts say the only way to turn the tide and move people back inland is by changing the calculus on coastal homes. That could come from increasingly unaffordable rates for hurricane or flood insurance or from buyers recognizing the actual risk of their seaside homes and choosing to live elsewhere or pay less.

Monday’s launch was originally in partnership with Realtor.com, one of the largest property listing sites in the nation. The plan was to list the flood risk information alongside every listing, active and past, on the site, but Realtor.com pulled out a day before launch citing “last-minute challenges.”

“We think this data is incredibly valuable to both home buyers and sellers on our platform, and we intend to deliver it to them in the best experience possible soon,” said Nicole Murphy, a spokesperson for Realtor.com.

Eby said First Street is “extremely disappointed” but hopes to integrate its data on Realtor.com in the future.

“I want to be very clear on one point — there are no technical issues with FloodFactor.com, nor is anyone calling into question our methodology, model or data. This was an internal decision on their end that has nothing to do with First Street,” he said in a statement.

Danielle Hale, chief economist at Realtor.com, said last week that the planned partnership was part of her company’s mission to offer its customers access to “as much information about the real estate market that’s relevant to them as possible.”

Hale acknowledges that adding this information to the listing could sway buyers away from flood-prone homes, but cited a survey her firm conducted this spring by Toluna research, which found a majority of buyers (55 percent) would still buy a home even if they knew it was in a flood zone.

But those buyers would want a discount. The survey found roughly four in 10 buyers would expect the flood-prone home to be cheaper.

“Any additional info that comes to the market can affect the value of home prices,” she said. “And we already know home buyers are trying to price in as much as they can.”

Hale’s department has contributed to a growing body of research that shows that climate change is already affecting real estate values. Their analysis, published in the Wall Street Journal, found that homes outside flood zones gained value faster than homes within flood zones.

In Miami-Dade County, Harvard University researchers found home buyers are increasingly seeking out higher elevation single-family homes, displacing the Black communities that were historically “red-lined” into those areas in a process known as climate gentrification. The City of Miami began studying the issue years ago but has yet to come up with any solutions.

Currently, Flood Factor and FEMA data show about 1 in 5 Florida homes are in a special flood hazard area, where flood insurance is mandatory. Flood Factor predictions show that it could jump to 1 in 4 in the next 30 years.

“It’s kind of a shocking statistic to think about,” said Jeremy Porter, First Street’s director of research and development.

Within the next 30 years, Flood Factor data also show that more than 300,000 homes in Florida are almost certain to flood.

Included in the results for a Flood Factor search is a list of potential solutions to keep a home and community safe from flooding, ranging from installing flood gates on a home to calling a local representative to advocate for climate action.