David Adjaye’s plans for a holocaust memorial outside Parliament have been quashed by the High Court.

Lawyers for the charity London Historic Parks and Gardens Trust successfully argued that the proposals were in breach of a 1900 legal act prohibiting the site from being used for anything other than a public garden.

The decision overturns the government’s approval for the scheme in July last year, a move which itself followed Westminster council’s rejection of the plans in 2019.

The £100m memorial would have occupied a significant portion of the listed Victoria Tower Gardens, which neighbours the Palace of Westminster on the banks of the Thames. 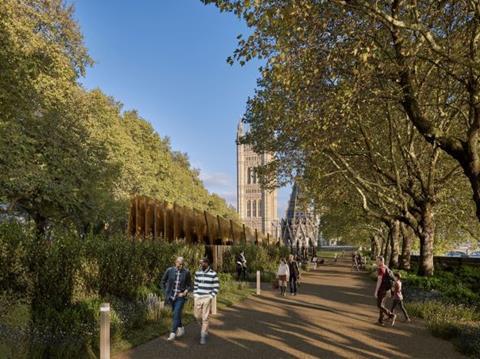 The trust’s lawyer Richard Drabble QC said the plans did not comply with the 1900 legal act, which was upheld by high court judge Justice Thornton in a ruling today.

Thornton said the act “imposes an enduring obligation” to retain the land “as a public garden and integral part of the existing Victoria Tower Gardens”.

She added: “Accordingly, the appropriate remedy is to quash the decision, so as to enable further consideration of the implications of the London County Council (Improvements) Act 1900 for the proposed scheme.”

Government lawyers argued that there was “no error of law” in process to overturn Westminster council’s refusal.

The trust said in February that the planning permission was “flawed” and described the scheme as the “right idea, wrong place”.

Due to open in 2024, the memorial was intended to be a focus of national remembrance for the six million victims of the holocaust during the Second World War.