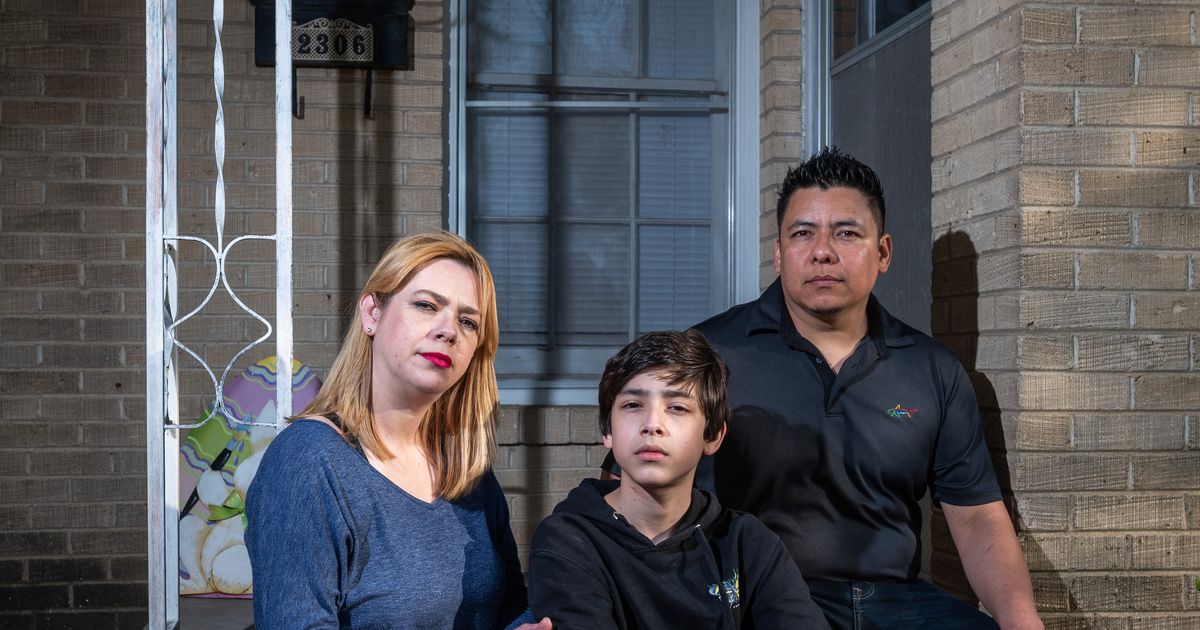 For families, renting a house in Dallas-Fort Worth has become highly competitive

Renting a house in the Dallas-Fort Worth metro area has become highly competitive not only for those moving in from out of state but also for those who have lived in Texas for years.

The population increase in North Texas, driven by migration from other Texas cities and elsewhere, and by a boom in out-of-state companies coming to establish themselves in the region, has created a favorable business climate and strong housing market demand, both in buying and renting of homes, explained Clare Losey, a housing affordability analyst at Texas A&M University’s Real Estate Research Center.

After traveling to Dallas in September 2021 to visit relatives in Mesquite, Favio Núñez and his wife decided to leave Stockton, Calif., for North Texas. That would allow them, he thought, to buy a home in the near future, even though that meant having to rent first.

After his wife accepted a job offer from an insurance company, they began searching for a rental.

“We know so many people who are moving because it’s cheaper and we thought that finding a house to rent would be very easy and much cheaper than in California. But the reality is that we have been looking for four months and nothing,” said Núñez, 29.

In 2019, Texas ranked second in relocations with 582,000 people moving to the state, according to the most recent Texas Relocation Report. Most people are moving from California and Florida.

Núñez is aware that moving to Dallas is like starting over, but he and his wife said they were tired of the cost of living on the West Coast.

“The bank approved me for a loan so I can give a down payment on a house, but prices in California are through the roof and I don’t want my wife and me to work just to pay the house every month and still be in debt,” said Núñez. “With that credit, I can buy a bigger house and for much less here in Dallas.”

According to Losey, demand for rental houses has skyrocketed due to the increase in mortgage interest, which has pushed more middle-income people to rent while they save to make a down payment and to be able to pay the mortgage. However, rental prices have also increased.

Rental prices for single-family homes in the Dallas area grew 13.4% in January 2022 compared with a year earlier, with the median price for a three-bedroom rental house rising to $1,961, according to a new report from CoreLogic, reported The Dallas Morning News.

After living in for the past four years in northwest Dallas, and paying the same amount for rent, the Rivera family received notice of a sizable hike in their monthly rate. The family, not wanting to subdivide the house – an option presented to them by their landlord – scrambled to find somewhere to move.

“One day, he sent us a message saying he had to increase our rent because his property tax payments had gone up and he had no other choice,” said Blanca Rivera, 39.

Losey explained that the rent increases had pushed more families to live in shared spaces, especially among the Hispanic community. In 2021 ,in the D-FW metro area, the median rent for a single family, existing home was $2,050 per month. Assuming that a family would spend no more than 30% of their income on rent, they would need to earn $82,000 a year to afford the rent for that medium-priced home. Only about 31.5% of Hispanic families in the DFW Metro earned that income in 2021.

The Riveras didn’t have a lease and couldn’t do anything to avoid a hike in their rent. Due to their inmigration status and with only the father having an Individual Tax I.D. Number, they decided to start looking on Facebook for a new home.

“I began to search like crazy, I came across many Facebook ads in different groups, but they only scam people. Hundreds of people advertise the same house and ask for a deposit before even seeing the house first, and when you look for it on Zillow or other official sites, it turns out the house is already sold or is not even for rent,” said Rivera.

One of the Facebook groups Rivera refers to is “Casas de renta en Dallas Fort Worth,” where every day hundreds of people post information about houses to rent or advertise their own homes.

In early February 2022, the family found a house for rent for $1,600 a month in the same Love Field area after a referral from a mom from the Rivera children’s school.

“Without (legal documents), it’s very difficult to rent, but this lady was a very good person. We were able to find this house, which was like a miracle, especially because we didn’t have to move our son to a different school,” Rivera said.

Due to the region’s growth and the need for more workers, some companies are hiring personnel from other countries with work visas. These workers can have an even harder time finding a house to rent since they don’t have a credit history in the United States.

Verónica Villaseñor has not stopped searching for houses since she arrived with her family in late March. But there is another obstacle: Her husband has not received his social security card yet, a requirement for most applications.

He took a job as a consultant for a supermarket company in Addison and left La Paz, in the Mexican state of Baja California Sur with his wife and two children: 12 and 20 years old.

Villaseñor declined to give her husband’s name to avoid conflicts with his new job.

“Nobody told us it was going to be this difficult. We had been told we would probably have to give double the deposit and a month or two in advance, but we still haven’t been able to find a place,” said Villaseñor, 44.

The family ruled out renting an apartment because, without the social security card, they can’t apply for one either.

“I don’t know what to tell the landlords anymore. We show them my husband’s employment letter where his salary is stated, the bank statements of our accounts in Mexico, the deeds of the properties we own in Mexico, and they still say they’re not valid, that we don’t have a credit history here,” said Villaseñor.

Having no credit history in the United States is a common problem that people who move from another country experience because there’s an expectation of having a minimum credit score to rent a house or an apartment in another country.

According to Credit Karma, a personal finance consulting company, the average credit score must be between 659 and 750 to rent in the Dallas-Fort Worth metro area.

The demand for rental housing will not slow down especially in North Texas, as more people and companies decide to make the area their home, said Losey.