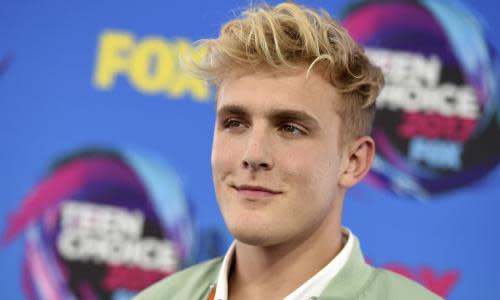 FBI agents, including a Swat team, served a search warrant at a California mansion belonging to the YouTube star Jake Paul on Wednesday.

The FBI executed the early morning search warrant at the Calabasas home in connection with an ongoing investigation, said Laura Eimiller, an FBI spokeswoman, in a statement.

A judge has sealed the search-warrant affidavit and Eimiller said she could not reveal the nature of the investigation or the person it was served on.

The city of Calabasas said on its social media pages that Paul’s home was being raided by the FBI, which was using the city hall parking lot as a staging area.

Video from local TV news helicopters showed agents gathering several rifles from the sprawling property with a boxing ring and hot tub in the backyard that appears in many of Paul’s recent YouTube videos.

A Swat team initially entered the property, Eimiller said. No arrests were made.

Email messages left with representatives for Paul were not immediately returned.

Paul, 23, has more than 20 million followers on his YouTube channel, which features stunts, pranks, stories from his personal life, and more recently music videos. His older brother, Logan Paul, has a similar YouTube channel with even more followers.

Neighbors have complained to media outlets for several years about the stunts Jake Paul has pulled on the property for his YouTube channel.

Last month, Paul drew harsh criticism after video emerged of a party hosted his mansion amid the coronavirus pandemic. Footage showed dozens of people at the day-long party, where guests did not wear masks or observe social distancing guidelines as they swung from construction machinery, according to Insider.

NEW: The mayor of Calabasas & neighbors tell me they’re outraged after they say YouTube celebrity @jakepaul threw a massive party at his mansion on Saturday. They call it irresponsible, selfish, & say it’s businesses & workers who pay the price for this w/ lockdowns. 10pm @FOXLA pic.twitter.com/COiVleuDH2

“It’s just a big huge disregard for everything that everybody is trying to do to get things back to functioning,” Alicia Weintraub, the mayor of Calabasas, told Fox 11. “It’s really just a party acting like Covid does not exist; it’s acting that businesses aren’t closed.”

In response, Paul told Insider that he spoke with Weintraub and “everything is cool”, though he noted he was “not the type of person who’s gonna sit around and not live my life”.

With coronavirus case and fatalities on the rise, California’s governor, Gavin Newsom, has repeatedly admonished residents for hosting gatherings without adhering to social distance guidelines. Multiple outbreaks have been linked to fraternity parties on college campuses.

In June, Paul was charged with criminal trespassing and unlawful assembly by police in Scottsdale, Arizona, when he appeared on video inside a mall that a big crowd of people had broken into, looting stores.

Paul said in a subsequent YouTube video that he had only been looking for people protesting the death of George Floyd and did not take part in any of the destruction.