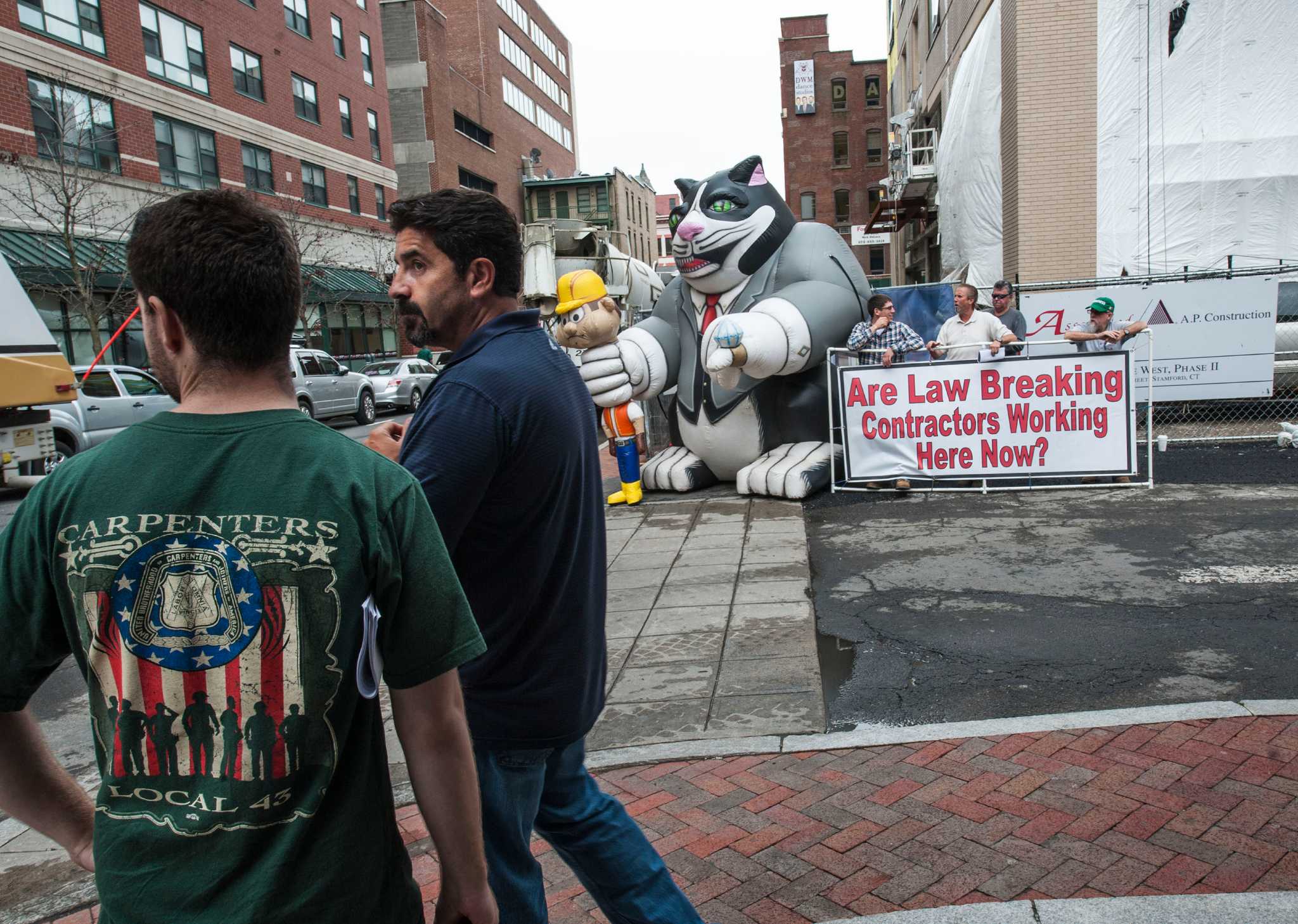 Fat Cat was back in Stamford Thursday, flashing a diamond ring on the pinky of one paw and choking a construction worker with the other.

The inflatable character is a mascot of The New England Regional Council of Carpenters, a group that fights for a higher standard of living for union and non-union workers in the trade, and calls for fair contracting.

Fat Cat is a symbol of unscrupulous contractors who flaunt labor laws, undercut law-abiding competitors and cheat workers, said Ted Duarte, senior organizer for the council. The hard-hat with a paw around his neck represents not just construction workers “but the industry itself,” Duarte said.

The council has been following Intext around the state, Duarte said.

“When we get numerous calls about the same contractor from workers on the job, we look at that contractor,” Duarte said. “That’s what happened with Intext. The complaints got more and more frequent.”

It began with the construction site of the University of Connecticut’s $32 million basketball practice facility in Storrs.

“We would see one workforce during the week, and a completely different crew on the weekends,” Duarte said. “The weekend crew was making half of what the state-mandated prevailing wage is for public projects, and they were making it in cash. That’s how this contractor was able to undercut everybody else who bid on the job.”

The state Department of Labor paid a surprise visit to the UConn site and found that Intext, along with J&V Construction of East Hartford, a subcontractor Intext brought in, used undocumented workers and paid them in cash to avoid state taxes, unemployment insurance costs and workers’ compensation. The labor department also found that workers on the project were being paid $20 an hour, about $30 less than the state’s prevailing rate.

In February the labor department ordered Intext to stop work on the UConn project. Intext had to pay the Department of Labor $200,000, said Gary Pechie, director of the Division of Wage and Workplace Standards.

A few weeks later the company that hired Intext for the UConn project fired Intext.

Then council members heard that Intext had won a bid for work on a new science lab at Southern Connecticut State University in New Haven.

“We knew from talking to other contractors that the Intext bid was extraordinarily low. We started putting pressure on the university and the general contractor,” Duarte said. “We told them the tactic Intext would use, and we were successful in knocking them out.

“After that, we knew Intext would try to make up their losses from the two state jobs at their Park Square West job in Stamford, a private project with no prevailing wage.”

The Department of Labor showed up unexpectedly at Park Square West and found that Intext was misclassifying employees as independent contractors to avoid paying workers’ compensation insurance. Last week the department ordered Intext to stop work on Park Square West.

Intext must pay a fine and obtain workers’ compensation insurance before it can return to Park Square West.

“Until they clean up their act, we will continue to look for where they are working,” Pechie said.

A message left for Intext Thursday was not returned.

“Stamford continues to be fertile ground for what we investigate,” Pechie said, but “we are crisscrossing the state and finding this mindset everywhere. We have to keep drilling down to eradicate it. We’ve stepped up enforcement in the last two to three years. I think it will take another two to three years to get the message out that you can’t just disregard our laws. There is a cost to taxpayers, there is a loss in government revenue, there is a risk to workers’ livelihoods and safety, and the honest businesses can’t compete.”

When a contractor does not pay workers’ compensation insurance for his employees, taxpayers cover the cost of medical care in the case of injury. When a contractor does not pay unemployment insurance for his employees, taxpayers pick up the cost of unemployment pay in the case of job loss. Contractors who pay workers off the books cost Connecticut $65 million a year in lost income-tax revenue, according to an estimate from the National Employment Law Project.

“That’s why I don’t understand it when people say the labor department is not business-friendly, that we put out businesses,” Pechie said. “What businesses are we putting out? We go after the ones that don’t comply with any of the laws created to better society. They disregard building codes that protect people who will live in the buildings. They disregard safety laws that protect the people building the buildings. They hurt the legitimate businesses that obey the laws and pay people wages they can live on.”

Some unscrupulous contractors cheat workers out of pay or don’t pay them at all, Duarte said. While they pocket their profits, law-abiding companies can’t win bids because they enumerate actual costs for the work, Duarte said.

“It drives down the standard of living for workers. It’s such a terrible cycle,” Duarte said. “Everybody suffers, except the unscrupulous contractor.”

Some states cite project developers or landowners, but Connecticut allows the Department of Labor to go after only the companies with workers on the job, usually contractors and subcontractors.

“We may have to get legislation to deal with that,” Pechie said. “I have a sense that we are making some headway with this problem, but we have to tweak it a little more.”