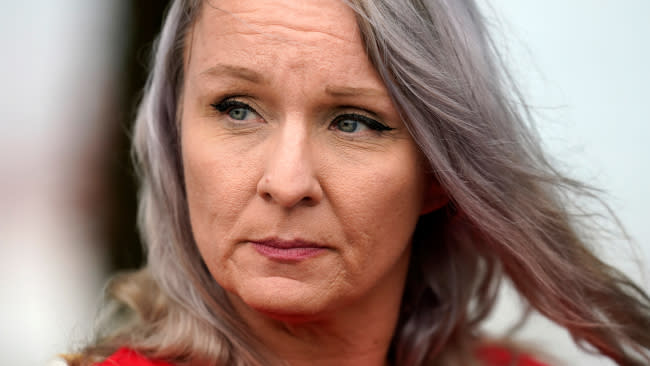 After days of search efforts, family members of the crew missing after the Seacore Power capsized are still waiting for answers regarding their loved ones.

On Tuesday, Marion Cuyler recorded a video of the turbulent weather from her workplace and sent it to her fianceé, Chaz Morales, a crane operator on the Seacor Power.

“He told me around one or something that they were jacking down. They were heading out, and I told him, I said, ‘The weather is too bad. You need to come home,'” Cuyler recounted to reporters on Thursday.

It was one of the last conversations Cuyler had with Morales before the turbulent weather intensified, the 129-foot Seacor Power lift boat capsized amid hurricane-force winds and turbulent waves about 8 miles south of Port Fourchon, Louisiana, in the Gulf of Mexico.

“One squall came through, I think the Coast Guard said it went from 10 to 20 knots to 50 to 80 knots in a matter of minutes, and it just caught ’em by surprise,” Cuyler said.

The vessel had 19 members on board at the time, six of whom were rescued soon after the incident. As of Thursday evening, only one death had been confirmed from the incident after a body was recovered on Wednesday. The search continues for the remaining 12 crew members, Morales among them.

“He technically shouldn’t have been on the boat to begin with because Tuesday was his crew day change,” Cuyler said. “He was supposed to get off, but he decided to work over to help support his kids and everything because he does have his kids.”

In a bulletin on the progress of the search, the Coast Guard noted that crews have searched for a combined 70 hours, covering approximately 6,380 square miles — an area roughly the size of Hawaii.

Stormy weather delayed rescue efforts on Thursday, though divers were able to conduct operations and knock on the hull of the vessel, reportedly not receiving a response. The Coast Guard searched Thursday evening with air and surface assets, before suspending operations overnight. The search will resume on Friday.

Some family members of the missing crew such as Cuyler have been holding out hope that perhaps the men had gotten stuck inside the boat with air.

“I heard from someone that was rescued that they are in the boat — which is why we needed those divers in the water, as quickly as possible,” Cuyler said.

The United States Coast Guard declared the incident as a major marine casualty on Thursday as search efforts continue.

Under U.S. law, a major marine casualty can be declared for any accident involving a commercial vessel that meets one of four circumstances: the loss of six or more lives, the loss of a mechanically propelled vessel of 100 or more gross tons, property damage initially estimated at $2 million or more or deemed a serious threat to life, property or the environment due to hazardous materials.

In the case of Seacor Power, Coast Guard Petty Officer 3rd Class Carlos Galarza told NOLA.com that the disaster qualified as a major marine casualty since the vessel weighed more than 100 tons and its capsizing is estimated to have met the $2 million threshold in damage.

Galarza also stressed that investigators had not yet determined whether the criterion on the loss of lives would apply to the case of the Seacor Power.

Family members of those missing are now questioning why the vessel went out to sea in the first place.

“That’s what everyone is saying — why did it leave?” Cuyler said. “Who gave the orders for this boat to leave in this type of weather? Gale-force winds, it shouldn’t have left. Especially a jack-up rig. There’s no way.”

Accidents regarding lift boats are not a new thing, though there have been less of them over the years as regulations tightened in recent decades.

One of the main features of lift boats is their legs and feet, David Bourg, founder and managing partner at MiNO Marine, LLC, and adjunct professor at the University of New Orleans School of Naval Architecture and Marine Engineering, Bourg told AccuWeather National Weather Reporter Bill Wadell. Using these, it can lift its hull completely out of the water with the purpose of creating a stable working platform.

“The particular lift boat [from this] tragic accident had 265 feet of leg, so it’s like a 26-story building,” Bourg said.

Lift boats were invented in southern Louisiana, he noted, meaning they’ve always had to contend with storm conditions and hurricanes.

“They have to be designed to meet rigorous standards for severe weather, and they have to have protocols in place when hurricanes or tropical storms are forecast and so on,” Bourg said. “Those standards relate to afloat stability, elevated stability, the strength of their legs and their ability to withstand high winds and waves.”

Storm reports from the area on Tuesday indicated wind gusts of 75 mph were measured during the storm near Grand Isle. A 112-mph wind gust was also measured offshore at an oil rig.

“Let’s not speculate and let’s let the experts get in there and see what happens and hopefully there will be more survivors and we’ll learn some lessons after it’s all done and we know what actually happened,” Bourg said.

Expressing frustration and anger over the situation, Cuyler called for the tragedy to lead to change.

“Hopefully the companies will decide that maybe they should wait a couple of hours before sending lives at risk,” she said. “They need to think of their crew before they think of their pockets.”

Keep checking back on AccuWeather.com and stay tuned to the AccuWeather Network on DirecTV, Frontier, Spectrum, FuboTV, Philo, and Verizon Fios.