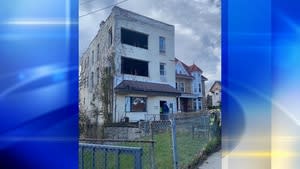 Crews have spent Friday tearing down a building in Bellevue after neighbors said it started to collapse on its own, creating a dangerous situation.

The building along Forest Avenue has been in bad shape for nearly a decade, according to neighbors.

It got much worse yesterday, when bricks and concrete were falling off the structure.

Neighbors said the home was condemned a few years back, so Channel 11 asked the Bellevue Building Code and Zoning officer why it wasn’t torn down sooner.

“It was actually condemned last year. It may have been condemned previous to that, but the last notice was actually February. It was sold to somebody else to refix it and they just never did,” said Shawn Jacobs, the Bellevue building code and zoning officer.

Neighbors on both sides of the building were evacuated after Thursday’s partial collapse. Those six people will be allowed back in their homes Friday afternoon.

Crews told us the foundation was badly cracked, so they needed to tear it down right away.

“We got a call from one of the neighbors saying one of the back corners of the building was sliding so I came out and looked at it and noticed it was moving decently. I called out the fire marshal and public works division.”

Allegheny County’s Blight Removal program just received a second round of funding of about $1.8 million for demolition planning and surveying.

Channel 11 reached out to the county, asking how many condemned buildings currently need to be demolished, and what the process andcost would be.

The county spokesperson said she couldn’t answer those questions, because they don’t keep any kind of master list and the responsibility is on each municipality.

The zoning officer in Bellevue said the owners of the building live in the North Hills and came by Thursday, and is working with them to discuss options. Right now, it”s undetermined if they will be cited. They hope to be done with the demolition Saturday.