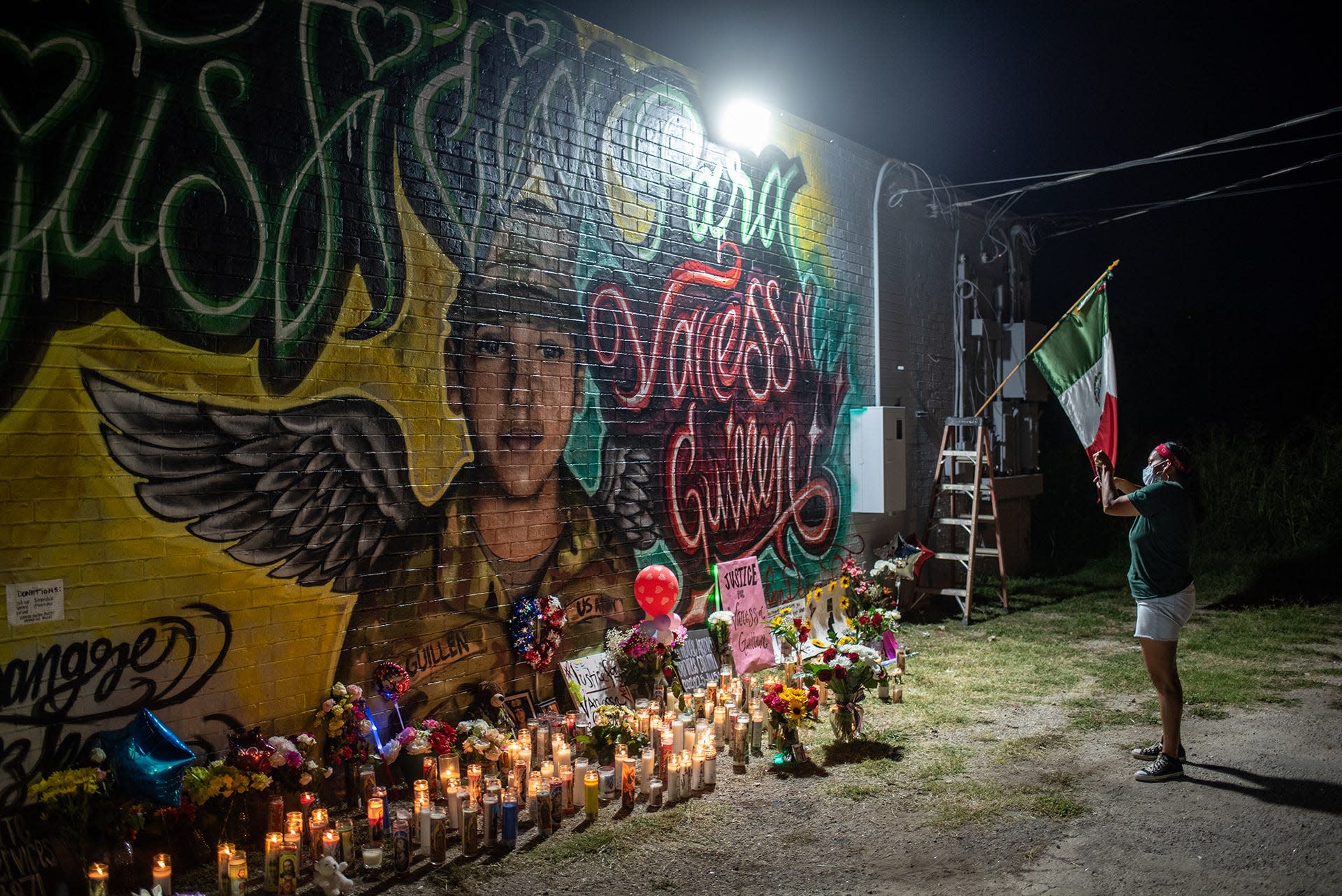 A timeline of the search for Vanessa Guillen

Guillen’s family drive to Fort Hood to tell officials she had not responded to text messages or phone calls from her boyfriend, sisters or mother throughout the day.

The U.S. Army Criminal Investigation Division is notified Guillen is missing. A witness says that before her disappearance, she left the arms room where she was working to go to an arms room controlled by Robinson to confirm serial numbers for weapons and equipment.

The Belton Police Department, the Belton Fire Department and Texas Department of Public Safety troopers search an area along the Leon River and FM 317 after Fort Hood requests their help. Fort Hood investigators told them that a phone possibly belonging to Guillen was pinged in the area.

Fort Hood Military Police issue a “Be on the Lookout” (BOLO) for Guillen to surrounding law enforcement. They say Guillen’s car keys, barracks room key, identification card and wallet were found in the armory room where she had been working.

The U.S. Army CID offers an award of up to $15,000 for information leading to the whereabouts of Guillen.

The U.S. Army CID interviews Robinson. He tells them that after he finished his work on April 22, he went to his off-post residence that he shared with his girlfriend, Cecily Aguilar, and did not leave the rest of the night, except around 6:30 p.m. when he had to come on post to sign on to a government computer to enroll in training.

Secretary of the Army Ryan D. McCarthy starts a press conference about the Army’s response to COVID-19 by mentioning Guillen. “I’d like to start out this morning by talking about a missing soldier, Private First Class Vanessa Guillen, in hopes of increasing the public’s awareness and assistance in finding her. Private First Class Guillen went missing on 22 April from Ford Hood, Texas. In concert with local law enforcement efforts, the Army will continue aggressively searching for her. Our hearts go out to her family, and we will not stop looking for her until we find her.”

While investigating Guillen’s disappearance, the U.S. Army CID uncovers a statement that could be considered potential sexual harassment. After subsequent investigation, another allegation of verbal harassment involving the same individual was discovered. They do not tell the public about the existence of this statement, what the statement is or who made the statement.

Mayra Guillen, Vanessa Guillen’s older sister who lives in Houston, says she and her family have yet to receive any information regarding the disappearance. Mayra Guillen says because she and her family are not allowed on base to search, all they can do is hand out flyers in the surrounding community and wait for answers.

Investigators interview two witnesses who say that on April 22, they saw Robinson pulling a large “tough box,” with wheels, that appeared very heavy in weight, out the arms room where he worked. The two witnesses said they observed Robinson load the “tough box” into his vehicle and drive away.

Robinson consents to a search of his cell phone, which shows he made multiple calls to Aguilar the night of April 22 and as early as 3:05 a.m. April 23.

Fort Hood Public Affairs Director Tom E. Rheinlander says they continue to investigate Guillen’s disappearance. “At one point, more than 500 soldiers from the 3rd Cavalry Division searched daily on foot in training areas, barracks and across the post,” he said. He said additional targeted searches with smaller groups of soldiers continued, and aircraft from the 1st Cavalry Division provided more than 100 hours of flight time to the search on and off the installation.

The Guillen family holds a press conference. They say Guillen told them prior to her disappearance that she had been sexually harrassed at Fort Hood and did not feel she could report it. They call on the Army to be more transparent about its search for her. “I haven’t seen anything that proves to me that they are actually searching,” Mayra Guillen says.

The Guillen family protests outside of Fort Hood, demanding answers about the soldier’s disappearance.

U.S. Army investigators increase the reward for information leading to the whereabouts of Guillen to $25,000.

The U.S. Army Criminal Investigation Division says it has now interviewed more than 150 people and that it has no credible information or reports that Guillen was sexually assaulted.

Authorities find skeletal remains in a field in Killeen, Texas. Guillen family says it’s not Pfc. Vanessa Guillen. Authorities later confirm they are the remains of Pvt. Gregory Morales, who was last seen in August 2019. Investigators say nothing indicates that the Morales and Guillen cases are related.

The U.S. Army CID, the Bell County Sheriff’s Office and the Texas Rangers search the Leon River at Belton after location data from Robinson’s phone indicated it was near the intersection of Farm-to-Market Road 436 and West Main Street in Belton, specifically, on or around a bridge at 1:59 a.m. April 23, before going north and remaining in the area for about two hours. They find the burned remains of what appears to be the same “tough box” witnesses described Robinson leaving Fort Hood with on April 22. They also smell something decomposing, but they do not find any human remains.

Aguilar tells investigators that Robinson told her on April 22 that he struck Guillen with a hammer in the arms room at Fort Hood, killing her. Aguilar tells investigators that Robinson took Guillen’s body off the post, picked Aguilar up from her work at a gas station and then showed the body to her. Aguilar said they then tried to dispose of the body in multiple ways over multiple days and burned their clothes at their residence.

The Lone Star Fugitive Task Force tries to find Robinson, who they say has absconded from Fort Hood. They do not share his name or the fact that they are looking for him with the public.

Robinson fatally shoots himself when confronted by law enforcement in the 4700 block of East Rancier Avenue in Killeen.

Damon Phelps, a special agent with the U.S. Army CID, says Robinson was not involved in the statement that is potentially sexual harassment that Army discovered on May 7. Phelps said the Army also hasn’t found evidence that a noncommissioned officer walked in on Guillen in a locker room while she was showering.

The remains found June 30 are identified as Guillen.

Attorney Natalie Khawam, who represents the Guillen family, proposes a bill named #IAMVANESSAGUILLEN, which would help protect military victims of sexual harassment and assault. Khawam, who has worked on similar legislation in the past, will introduce a draft of the bill on July 30 in Washington, D.C.